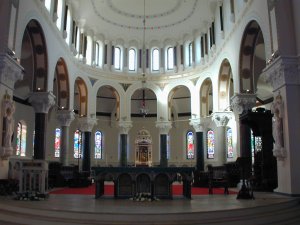 The Metropolitan Archdiocese of Cashel & Emly in mid-western Ireland is in the province of Munster.  The then separate dioceses of Cashel and Emly were established in 1111 by the Synod of Rathbreasail.  Cashel diocese was promoted to the status of Metropolitan Province in 1152 at the Synod of Kells.  Emy diocese was formally joined to Cashel in 1718.  The Patron Saint of the Archdiocese is St. Ailbe whose Feast Day in 12 September.  Suffragen Sees: Cloyne, Cork & Ross, Kerry, Killaloe, Limerick, Waterford & Lismore.  Includes most of County Tipperary and part of County Limerick.

Cathedral of the Assumption

The Cathedral of the Assumption stands on the site of earlier chapels. The first church on this site was part of the Carmelite priory, which dates from the early fourteenth century.  Some time before 1730 George Mathew, Catholic proprietor of the Thurles Estate, built a chapel for the Catholics of Thurles beside the ruins of the Carmelite priory.  It was know as the Mathew Chapel.  In 1810 Archbishop Bray consecrated the new “Big Chapel” which was more spacious and ornate than its humble predecessor.

Soon after his appointment as Archbishop in 1857, Dr. Patrick Leahy revealed his plan to replace the Big Chapel with “a cathedral worthy of the archdiocese”.  Building commenced in 1865, and the impressive Romanesque Cathedral with its facade modelled on that of Pisa, was consecrated by Archbishop Croke on 21 June 1879.  The architect was J. J. McCarthy.  Barry McMullen was the main builder and J. C. Ashlin was responsible for the enclosing walls, railing and much of the finished work.

The cathedral has many beautiful features, including an impressive rose window, a free-standing baptistry and a magnificent altar.  The prize possession of the cathedral is its exquisite tabernacle, the work of Giacomo dello Porta (1537-1602), a pupil of Michaelangelo.  This tabernacle, which belonged to the Gesu (Jesuit) Church in Rome, was purchased by Archbishop Leahy and transported to Thurles.

The cathedral was extensively renovated and the sanctuary sympathetically remodelled on the occasion of its first centenary in 1979. The most recent extensive conservation and renewal of the cathedral, during 2001-2003, has restored the building to its original splendour.