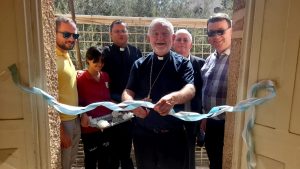 Archbishop Kieran is the Spiritual Director, leading the 2022 Holy Land Pilgrimage for the Equestrian Order of the Holy Sepulchre of Jerusalem  – Lieutenancy of Ireland.

27 members and friends of the Order visited Jordan, part of their 10 day pilgrimage visiting Israel,  Palestine and Jordan meeting with the ‘living stones’ in the parishes of the Latin Patriarchate of Jerusalem.

The school in Mafraq is one of a number of projects that the Equestrian Order support financially. Mafraq has a Christian community of only 500 faithful, in a city of 75, 000 population. The extension of the school serves the needs of the Latin Parish, as it ensures the continuation of a Christian presence in this part of the Holy Land. Without the school and the ongoing financial support, given by the Equestrian Order, the Christian population will be extinct as families would have been forced to move away from the area. 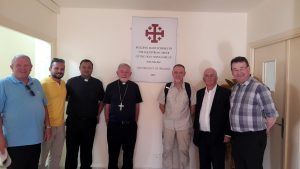